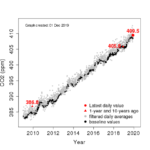 Axel Wilke writes... In the first half of the 19th century, some of the meadows used by English farmers to graze their cows turned brown. The grass was gone. It wasn’t that the soil was less fertile or that there was less rain than elsewhere. What differentiated the green and brown meadows was … END_OF_DOCUMENT_TOKEN_TO_BE_REPLACED